Following up on our trip to the Met earlier this week, yesterday we took the boys to hang out with friends at the American Museum of Natural History. It’s been my favorite museum since I was their ages, and love it as much as I ever did. Sure enough, the trip didn’t disappoint… it never does.

When I first got the Glass invitation, one of the first things I thought of was how cool it would be if Will got to run (er, walk cautiously and carefully, that is) through the hall of dinosaurs recording everything #throughglass. (The other was to capture a kids-eye-view of unwrapping Christmas presents, but that didn’t work out. At all.) Quickly, though, the thought of putting such expensive eyewear on his face made me nervous (since, like many five-year-olds, he tends to inexplicably fall more often than he should). So Henry was my next target partner-in-crime, but he refuses to put the things on, ridiculing me whenever I do. (He also yells “OK, Glass, take a picture!” whenever I wear them, trying to get them to take pictures that I didn’t intend.

So I’m finding some problems with Glass because they’re just not socially-acceptable to wear in public, and for them to gain traction in the mainstream – in more than just a “hey, check this out” kind of way – they need to look better, work more easily, hold a charge more consistently, etc. One of the things that Glass does have going for it is that, if you can get the one person willing to put aside social graces, you can have them screenshare their way through some pretty fantastic places, or even send several of them out (when they get less expensive, of course) and keep track of live feeds from different groups.

But back to the museum – and what a museum trip it was. A great exhibit on The Power of Poison, the Hall of Ocean Life, the Discovery Room, the Hall of Dinosaurs, all with good friends and funny kids. Couldn’t ask for a better Saturday afternoon.

BONUS: Glass, when powered on and plugged in to power, automatically backs up media to a private space on Google+, and sometimes picks a photo or two to make “Auto Awesome.” Here’s what happened to one of my photos (but you can’t see the animated snow falling on it like it does in G+):

For the last couple of weeks, I’ve had the chance to experiment with Google Glass. I’m not even sure I thought it would be worth checking out, but when the invitation came, I felt like it would be something worth doing – this video did a lot to make me think that there were real possibilities for Glass in the classroom, and that made it instantly interesting to me.

Mat Honan, in a recent post to Wired’s Gadget Lab titled “I, Glasshole: My Year With Google Glass” sums things up nicely:

The future is on its way, and it is going to be on your face. We need to think about it and be ready for it in a way we weren’t with smartphones. Because while you (and I) may make fun of glassholes today, come tomorrow we’re all going to be right there with them, or at least very close by. Wearables are where we’re going. Let’s be ready.

But what can you actually do with Glass? Right now, I’m not sure. I can ask it to look things up for me, but that would require talking to my glasses – talking to my phone was enough of a nerd-hurdle to clear, and talking to glasses feels so much worse. I can use it to show me interesting things nearly, which is pretty cool. I can also use it to give me directions and actually put them in front of my face, which is great.

One thing it’s great for is taking photos and videos and sharing them via Google+, Twitter, or email. It’s also pretty good for Google Hangouts (but for anyone to see me, I need to be standing in front of a mirror, which I normally don’t have handy). I can really see using media and hangouts together to give as close to an field trip-like visit to all sorts of places without actually having to be there. That example video I linked to above wasn’t lying – this could be very cool.

The other day, we took the boys to the Metropolitan Museum of Art, and here’s what we saw. Some highlights for them were the Christmas tree, Henry with Henry VIII’s suit of armor, the Temple of Dendur, and the mummies, while I was particularly taken with a couple of sculptures, particularly one of St. Bartholomew carrying his skin around.

Not too shabby, but I need to get over the awkwardness of wearing Glass around to capture more #throughglass. The future is coming, and it might even be here. “Let’s be ready.” 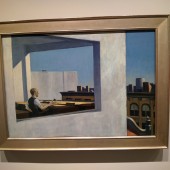